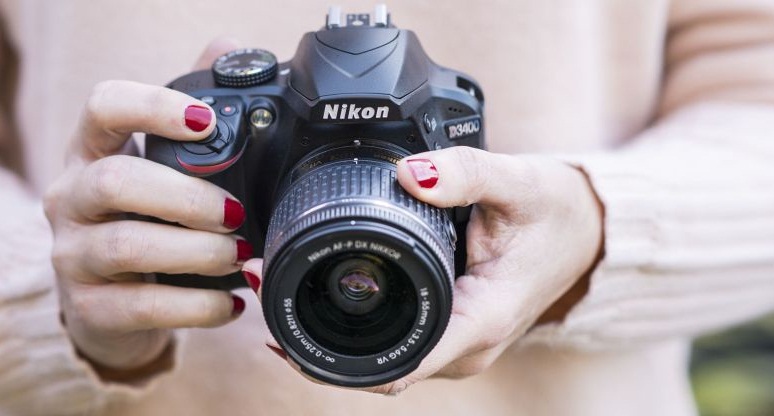 The D3400 is one of Nikon's most popular entry-level DSLRs, one that sticks to a no-frills template. While it maintains compatibility with lots of great Nikon lenses and offers full control over things like exposure and focus, the idea is that it's simple to use and small enough to take anywhere.

[Update: Nikon has now launched the D3500, which replaces the D3400. Coming with number of revisions and changes to the design compared to the D3400, the D3500 is now our pick of the best entry-level DSLR cameras available today.]

The model steps into the place formerly occupied by the D3300, which was a fine entry-level DSLR. So what's changed? Well, the body is a touch lighter for a start, and the battery life is considerably higher. There's also a sprinkling of extra features on the inside to make it even more appealing.

It's also launched the camera alongside a redesigned kit lens, one that sports a retractable inner barrel and a more streamlined design that eschews the focusing and Vibration Reduction switches we're used to seeing. Don't worry, though – you still have full control over these through the camera.

But, after so many warmly received models and a raft of fine competitors in both DSLR and mirrorless categories, does the D3400 have enough going for it to make it worthy of the beginner's attention? Spoiler alert: it does still make our best camera buying guide – and here we explain why.

The D3400 arrives with a 24MP sensor, which is arguably the most common pixel count right now across interchangeable-lens cameras. We also ave the same inside rival models like the Canon EOS Rebel SL2 / EOS 200D through to professional cameras like Sony's A7 III – and Nikon's own D750 and Z6, of course.

Here, it's an APS-C sensor, which is smaller than those inside the latter three models.

What's great to see is that the sensor inside the D3400 has no optical low-pass filter. This means it captures a little more detail than it otherwise would do, which, in turn, means your subjects should appear a little more crisp when you view images at their full size in Photoshop or with similar software.

This sensor works over a reasonably wide sensitivity range of ISO100-25,600, which represents a one-stop expansion over the native ISO12,800 range of its D3300 predecessor.

Once again it's paired with Nikon's EXPEED 4 processing engine, which, among other things, allows for 5fps burst shooting and Full HD video recording up to an impressive 60p.

So, that means there's no 4K video here, but then this is a feature that is still making its way through to entry-level DSLRs. If you need 4K video and you're on a tight budget, a mirrorless camera like the Canon EOS M50, Olympus E-PL9 or Panasonic GX80 would be a better idea. Want to stick with a DSLR? Check out Canon's latest EOS Rebel SL3 / EOS 250D.

Nikon's familiar Picture Controls are also on hand, although for those wanting their images and videos processed into more distinct styles immediately, the camera's Effects modes include options such as Super Vivid, Illustration and Toy Camera.

The camera's 11-point AF system features a single cross-type point in the centre of its array, with a maximum sensitivity down to -1EV. You can set the system to focus continuously on a subject, including with Nikon's 3D tracking technology, and the camera can also continue to autofocus in live view and when recording videos. Manual focus is also possible, selectable through the menu and performed with a ring at the very front of the camera's kit lens.

Not that they're not bettered elsewhere at this level and price point, but the specs of both the viewfinder and LCD are in keeping with what we expect at this level. The viewfinder is based on a pentamirror construction and shows approximately 95% of the scene. The LCD, meanwhile, measures 3in in size and has a respectable resolution of 921k dots, although as with many other cameras of its kind, it can't be physically adjusted to face different angles.

Wi-Fi hasn't been included inside the body, although wireless image transmission is still possible through the SnapBridge feature. First incorporated inside the D500, this uses always-on Bluetooth Low Energy to deliver images straight to smart devices, either as they are captured or afterwards. It's not possible to control the camera's shooting settings remotely in any way, although this is not too great an omission on such a model.

To help the first-time user better understand their camera, Nikon has once again implemented its Guide mode feature. This provides an alternative to the main menus and helps the user quickly capture specific types of images. There's also the familiar '?' button that can be called upon to explain camera functions.

There have been a few omissions from the D3300, though, such as the microphone port around the camera's side. This means that you're restricted to the built-in monaural microphones, although this is not a critical loss when you consider that it's aimed at beginner users.

The flash has also become weaker, its guide number dropping from GN 12m at ISO100 to just 7m here. Perhaps most importantly, built-in sensor-cleaning technology has also failed to make the cut, which means you have to use a more tedious process that requires you to take a reference photo before processing it with the included Capture NX D software, or raise the mirror and physically clean it with a swab or blower.

One thing that's gotten much better is the battery life. Whereas the D3300 offered 700 frames per charge – incidentally, is a perfectly respectable figure – the D3400 boosts this to 1,200. Perhaps that's down to the flash being less powerful but this is way beyond the norm at this level, and is considerably ahead of what the average mirrorless camera offers.

So, overall, the core specs – notably the sensor, AF system and video specs – compare well with the camera's chief rival, the Canon EOS Rebel T100 (known as the EOS 4000D outside the US), although these and others are essentially unchanged from the D3300. Some may lament the lack of built-in Wi-Fi, however, as well as a touchscreen and automatic sensor cleaning.