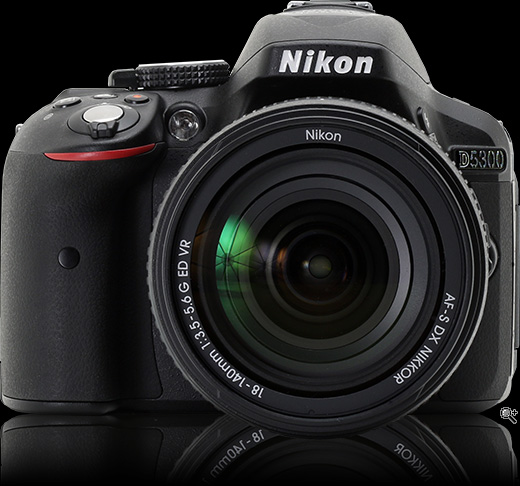 Nikon's 'advanced beginner' DSLR, the D5300 takes the D5200's place between the entry-level D3200 and the enthusiast-targeted D7100 in the company's APS-C lineup. The D5300 offers a 24MP sensor (like its 24MP APS-C stablemates), an articulated rear LCD, and more physical controls than the D3200, but without the twin-dial interface and professional-grade AF system of the decidedly higher-market (and much more customizable) D7100.

Both visually and ergonomically the D5300 is a near-clone of its predecessor (it's fractionally lighter and a tiny bit smaller), but under the hood it is a stronger camera in a couple of important ways. The D5300's 24MP sensor lacks an anti-aliasing filter, which - consistent with our experiences testing the D7100 and D800E - gives it the edge in terms of resolution over the D5200. The difference is subtle (especially with a kit zoom attached), but it's always nice to see improvements to critical image quality potential, especially in mid-range models.

The D5300 also offers a beefed-up video mode, which is now capable of true 1080/60p HD video. This, plus the slightly widened (3.2" compared to 3") fully-articulated 1.04 million-dot LCD screen, should mean that the D5300 will be attractive to videographers as well as stills photographers. Easy to miss, but useful features include built-in Wi-Fi and GPS - both firsts for Nikon's DSLR lineup. Battery life gets a boost too: according to CIPA figures the D5300 offers an endurance of 600 shots, compared to 500 from the D5200. Remember, though, that this figure does not take features like Wi-Fi or GPS into account, and using them will shorten the amount of time you can spend shooting.

The Nikon D5300 can easily be classified as an iterative update, providing only a handful of features that weren't present in its D5200 predecessor. It speaks volumes about the D5200 that adding only a few more things amounts to an APS-C DSLR with 24 megapixels, no optical low pass filter, 1080/60p HD video recording, a fully articulated display and built-in Wi-Fi. In terms of on-paper specifications, the the D5300 looks 'fully loaded.'

The main feature we really wish it offered is a touchscreen LCD. We've come to appreciate being able to perform certain actions by touch on competing cameras, particularly things like exposure compensation and AF point placement in live view mode. We'd also like to see twin control dials - something Nikon has traditionally saved for its more expensive models, but some of its competitors offer at this price point.

The table below shows how the major specifications of the D5300 compare against the D5200. As you can see, Nikon has updated a couple of core specifications, but the differences aren't huge.

Compared to its nearest competitor, Canon's EOS Rebel T5i, the Nikon D5300 offers a higher resolution sensor, more AF points, and the ability to shoot 1080/60p video (as opposed to 30p). It also includes built-in Wi-Fi and GPS. The D5300 is slightly smaller than the Canon in all dimensions, and a little lighter.

The T5i does have a couple of tricks up its sleeve, though - while both cameras have 3.2", 1.04 million-dot LCD screens, the T5i's is touch-sensitive, which we've come to really appreciate, especially when working in movie mode and live view. The T5i also features a 'Hybrid' AF system, which allows for faster and more positive (less hesitant) AF in live view and movie mode, plus AF tracking.

Compared to the rest

The D5300 may look good in comparison with its predecessor and Canon's equivalent model, but there are other options worth considering, beyond the two big brands. In terms of DSLRs, Ricoh's Pentax K-50 offers twin control dials, a weather sealed body and a larger viewfinder. If you're willing to look at mirrorless models, the Olympus OM-D E-M10 offers twin dials, a touch-screen, built-in Wi-Fi and an electronic viewfinder, all in a package considerably smaller than the Nikon.

Panasonic, Fujifilm and Samsung also make competitive models for a similar price, so it's worth considering which capabilities you do and don't need, before committing to one of the big two.