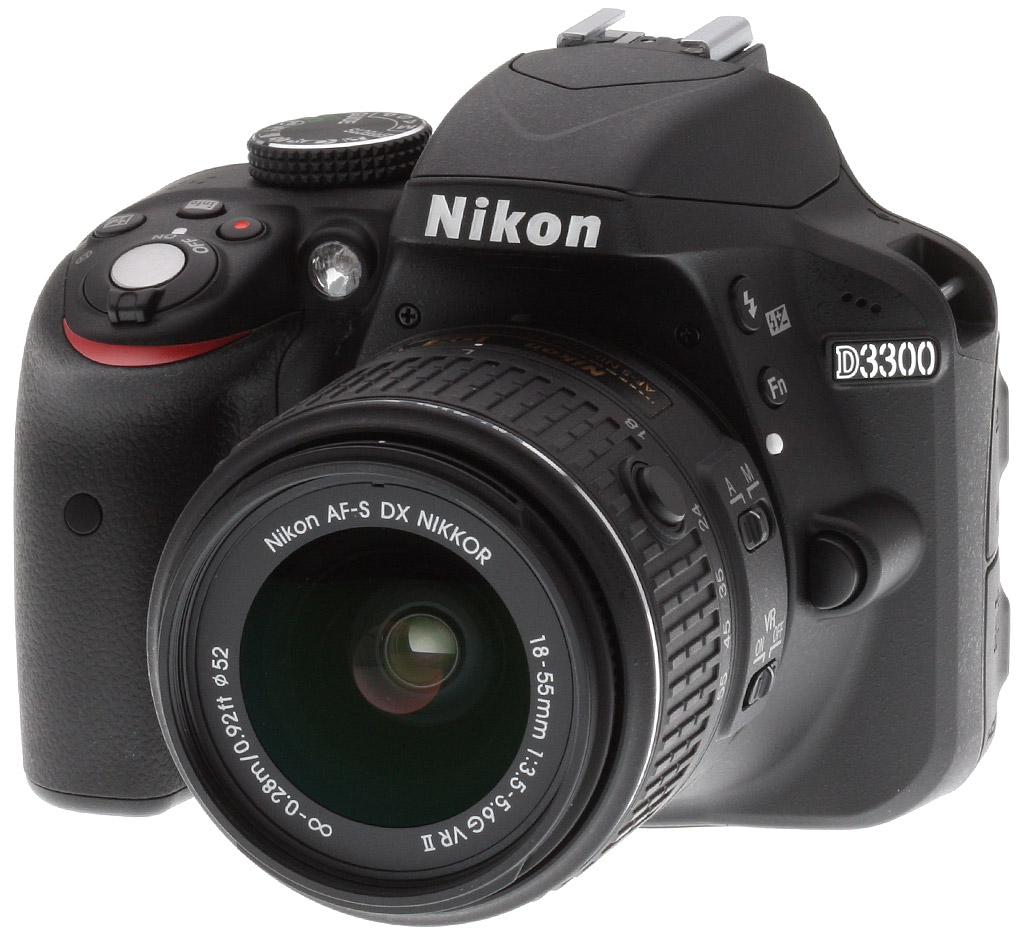 Don’t expect any big surprises here: the 24.2-megapixel D3300 looks like every other DSLR introduced before or since. Our review sample was all black with nicely textured grip. If black is too boring, it’s also available in red or dark silver. No matter the finish, the D3300 is just slightly smaller than its predecessor. It measures 4.9 x 2.9 x 3 inches, weighing 15.1 ounces for just the body. Although primarily made of plastic, it feels sturdier than the recently reviewed Canon EOS Rebel T5. The D3300’s technical innards are also far superior to the T5 (more on this later)

The camera comes with a newly designed, more compact Nikkor 18-55mm kit lens, but there’s no shortage of additional AF-S DX-designated lenses to choose from. Last time we looked there were 18 from Nikon, ranging from $200 to $1,500. Third-party suppliers like Sigma also provide options. A good first choice for newbies is the Nikkor 55-200mm telephoto zoom for $200. Since the digital factor is 1.5x, that lens will bring you up close to most subjects (300mm). These particular Nikon lenses mentioned here are not super-sharp or super wide-open but they’ll do the job for everyday shooting.

The D3300 has a quality fixed-mount 3-inch LCD on the back that’s rated 921K dots – double the spec of the T5. It’s a good one, handling bright sunshine well, once we cranked up the Monitor Brightness to +5. Making adjustments to the display is easy once you walk through the onscreen menu system. It’s linear and simple to understand, and, for those who are new to DSLRs, Nikon provides a Guide option on the mode dial that takes you through the basics. The other key feature on the back is an optical viewfinder with 95-percent field of view. It’s reasonably bright and readouts (f-stop, shutter speed, and so on) are very legible.

Like every DSLR, there’s a raft of keys and controls surrounding the LCD. There’s nothing unusual or scary here; if you’re not sure just check out the 120-page User’s Manual supplied with the camera. The battery is rated a solid 700 shots per CIPA – 100 more than the T5 – so you’ll have no problems shooting all day with this one, even if you go flash and video crazy. One thing that Nikon didn’t include is Wi-Fi – neither did Canon with the T5. It’s 2014, and there’s no reason why consumer cameras like this shouldn’t have wireless connectivity. Unlike Canon, at least Nikon offers it via an optional adapter ($60), but still, it would have been a nice plus considering the 3300 is pricier than the T5.

What’s in the box

You’ll find the body and kit lens along with various caps and a strap. You also get a USB cable, rechargeable battery, and plug-in charger. Also in the carton are the User’s Manual and a CD with Nikon ViewNX2 software for handling images and developing RAW/NEF files.

The D3300 has a good feel with a nice, deep grip. (As always, you need to do your own hands-on to make a final determination.) Controls are logically placed and changing camera parameters is a breeze.

As for the photographs, the D3300 delivered on the details one expects from a 24MP APS-C imager.

The mode dial, on the top of the camera, is the main control. Like Canon’s T5, it has a combination of settings for both experienced and first-time users. You’ll find Smart Auto, flash off, PASM, and six specific scene modes (Portrait, Landscape, Child, Sports, Close-up, and Night Portrait). There’s the Guide setting to teach you the basics of the camera, and Effects, where you’ll find 13 special effects to jazz up your shots, such as Super Vivid, HDR Painting, Toy Camera and – new to the D3300 – Easy Panorama. This is similar to Sony’s popular Sweep Panorama where you just pan a scene and the camera stitches the images together, so you don’t have to bother doing it by “hand” with software.

We took the camera and its kit lens out to various locales in the U.S. Southwest. Stills were set to maximum resolution (6000 x 4000 pixels) as was video (1920 x 1080/60p). We liked the two-year-old D3200, which is still available as a $499 kit, but the newer edition is the one to get. Although it has the same 24.2MP APS-C imager, Nikon dropped the low-pass filter to improve image quality and sharpness. Burst mode is improved to 5 fps from 4, ISO jumps to 25,600 versus 12,800 and video is now 60p instead of 30p. Most of this is thanks to a new processor (Expeed 4). This camera’s 24.2MP imager really deserves high-quality lenses so you might want to budget for a nice portrait or wide aperture wide-angle prime, once you really get the feel of the camera. Although the 18-55mm f/3.5-5.6G VR II kit zoom is okay, we really wanted more – and better.

The D3300 has an 11-point AF system (one cross-type). At no time did the camera hunt for focus. We just framed and fired, which is exactly what you want from any camera; the T5 was just as responsive with its 9-point (1 cross-type) system. Where the Nikon really leaps ahead is burst mode (5 frames per second versus 3). If shooting sports is high on your list, the D3300 is the one to buy even though it’s $100 more.

As for the photographs, the D3300 delivered on the details one expects from a 24MP APS-C imager, and we really liked the results. Even though we’re somewhat partial to the overall Canon “tone” that we saw in the T5, we were very pleased with the shots we captured (see samples). We had a lot of fun in Auto for general snapshots, and then used aperture-priority for some desert flowers. Colors had a nice pop and richness that was quite evident on a 27-inch monitor. We played with Super Vivid mode to take the colors over the top, and were impressed with the Easy Panorama option that gives Sony’s Sweep Panorama a good run for the money. What can we say? The extra megapixels without the low-pass filter will exceed your expectations. And yes, they’re better than the T5’s.

We’re happy to say Nikon has come a long way on the video front since the bad old days of the D90. With older Nikon video-capable DSLRs, you used to need the skills of a Hollywood cinematographer to get proper focus. Plus the clips were filled with muted colors and rolling shutter effects. With the D3300, focusing is much simpler and rolling shutter is minimized. Colors do not have the richness and pop of the stills but clips were just fine for sharing with friends. However, the D3300 has built-in mono mic, so don’t expect to be blown away by the audio. We squawked about the mono audio in the Canon T5 and we’ll rag about it here too. We simply do not understand why manufacturers offer Full HD video without stereo sound. At least here the video quality is better at 1080/60p versus 30p for the T5

Quality results at high ISOs are another area where the D3300 outperforms the T5. We found Canon images really fell apart quickly after ISO 1600 and the top setting, 12,800, was a pixelated mess. The Nikon hits 25,600 and even though results weren’t great at that lofty level, they were useable at smaller sizes. The D3300 had a much gentler fall-off overall. If you like shooting in low light without a flash, the Nikon gets another mark in the plus column.

Like the older D3200, the new Nikon D3300 easily earns our recommendation. Image quality is excellent and videos have taken a nice step forward. We still have to knock Nikon for the mono sound in 2014 and asking people to pay another $60 for Wi-Fi via an adapter. Yet, all in all, Nikon’s new entry-level DSLR is a good one and a much better option than Canon’s most affordable model.