What is the Panasonic Lumix LX100?

The Panasonic Lumix LX100 might be considered a natural evolution of the Sony RX100 series. This, too, is a small compact that offers performance comparable with a compact system camera.

Panasonic has moved the genre on by packing an even larger Micro Four Thirds sensor into a slightly larger body that offers much better manual control than on any camera of this large-sensor-in-small-body class.

At £699, it may seem expensive for what initially appears to be a normal compact camera. But rarely do you see small solutions like this that are so geared towards the real enthusiast. There are some issues Panasonic could solve in a Lumix LX100 II – some of them serious – but this is the sort of camera that could rekindle your love for photography.

The Panasonic Lumix LX100 is a small camera, but one that exudes far more credibility than your average Lumix compact. It’s metal-bodied, chunky and has the sort of manual control dials that are fairly rare in a camera of this size.

Some of you may be disappointed to hear that the Lumix LX100 is noticeably, significantly larger than both the Sony RX100 III and Canon G7 X. Those are this camera’s two obvious rivals, and where they’re borderline pocketable, this one is slightly larger. Still small, yes, but you lose a degree of convenience.

The Panasonic Lumix LX100 looks and feels a little bit more like a shrunken Fujifilm X100S, an excellent fixed-lens APS-C model. Its proportions are very similar to the new Fujifilm X30, in fact.

There are handling benefits to being a bit larger, though. First, there’s a handgrip. It’s a small one, but offers a slightly more traditional feel that many of you may appreciate.

It also makes room for the Panasonic Lumix LX100’s manual controls. On the top plate are dedicated dials for exposure compensation and shutter speed. 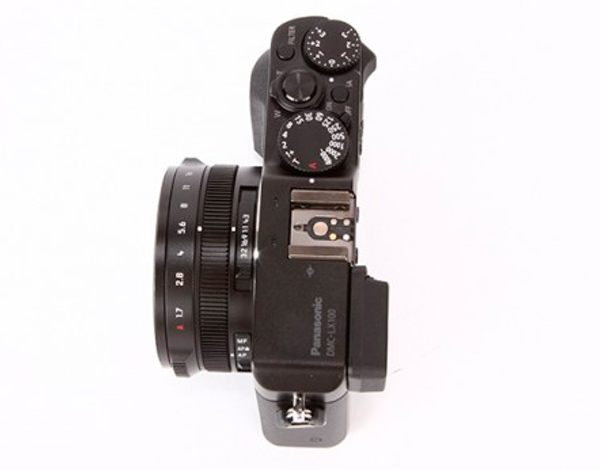 Add to these the manual focus and aperture rings around the f/1.7-2.8 lens and you have everything needed to take full control over many of the camera’s most important settings. The level to which the Lumix LX100 lets you feel you’re getting your hands dirty with the mechanics of photography is simply fantastic.

The direct thunks and clicks of these dials offer a sense of mastery you just don’t get when you’re reduced to thumbing a D-pad through menus – like you are with most smaller cameras. Both the Sony RX100 III and Canon G7 X offer lens dials, but neither gets close to the pure physical joy of the Lumix LX100.

You may have been lured in by the promise of a larger Micro Four Thirds sensor – the Sony and Canon both have 1-inch sensors – but this manual handling is really the star of the show.

The Panasonic Lumix LX100 uses a 16.8-megapixel Micro Four Thirds sensor, but it doesn’t use the whole sensor when taking shots. Instead, it offers a few different aspect ratios of picture, each of which uses a slightly different chunk of the full sensor.

When shooting in the standard aspect, you end up with 12.8-megapixel photos. It’s effectively a sensor of this resolution: don’t be fooled by the full resolution count.

Why not use the full sensor? It’s a trade-off, needed to get the LX100 down to its current size while still offering a very fast lens. The glass likely doesn’t actually properly cover the entire sensor module.

Next to the Sony RX100 III and Canon G7 X, you end up with fairly low-resolution shots that’ll limit how much you can crop into your photos without seeing compromise.

The Panasonic Lumix LX100 lens is quite remarkable. With a maximum aperture of f/1.7 when shooting wide open, you have great control over the depth of field for a camera of this size, and comparatively excellent low-light performance – on the lens’s part at least. We’ll look at high ISO performance later.

Zoom range is 24-70mm, which is spot-on what you get with the Sony RX100 III, but with slightly greater maximum aperture at 24mm – the RX100 III is f/1.8 wide open. A telephoto star this is not, but for landscape, street and portrait shooting, the LX100 has it covered.
Maximum aperture drops down to f/2.8 at the further reaches of the zoom, but so do this camera’s main rivals. Having that extra bit of lens versatility at 24mm is another attraction for serious photographers looking for an everyday shooter. The LX100 is perfect for those times – which are many, if you’re like us – when you simply can’t be bothered to take out the DSLR with a couple of lenses.