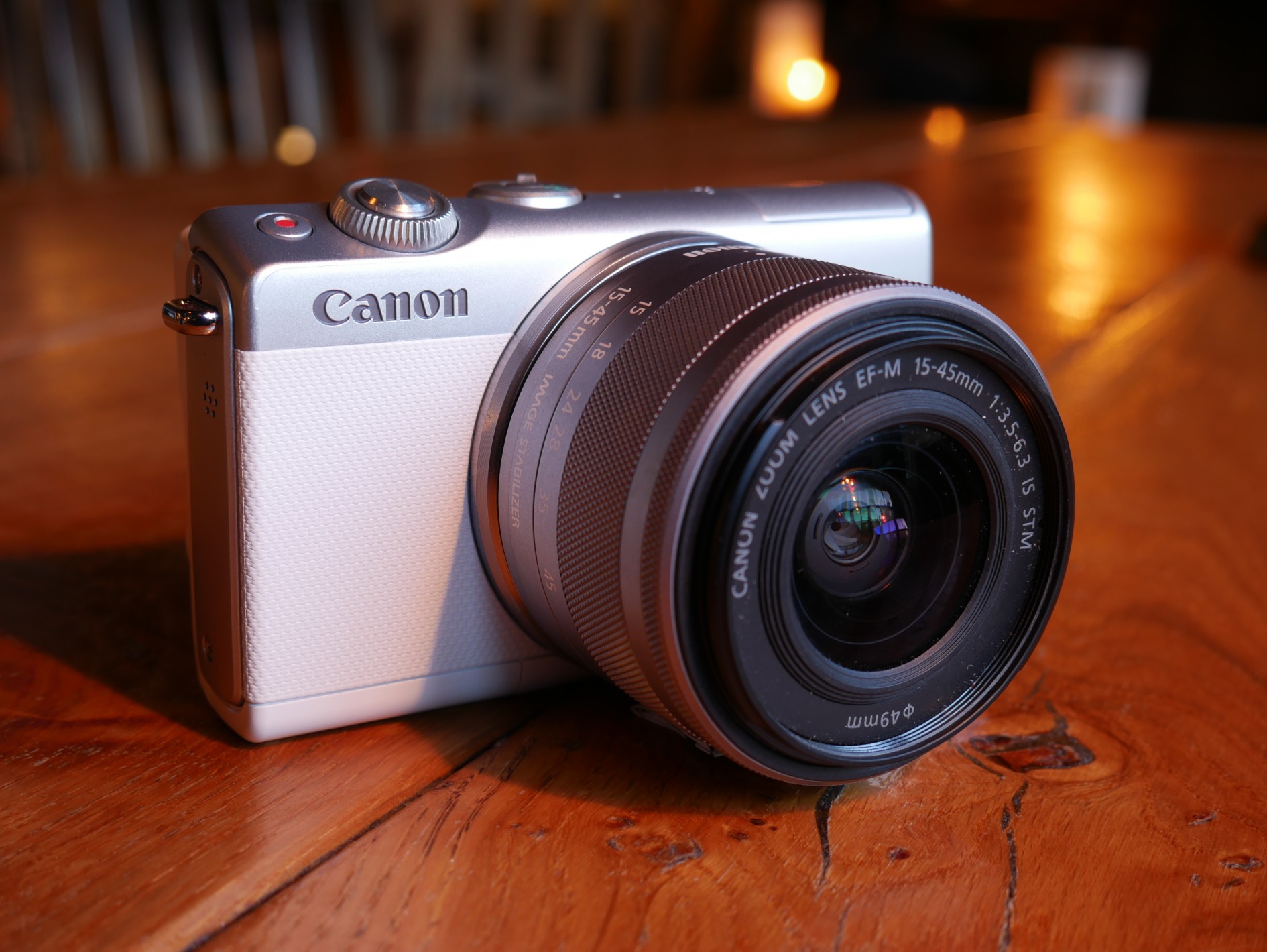 The Canon EOS M100 is an entry-level mirrorless interchangeable lens camera with a 24 Megapixel APS-C sensor. Launched in August 2017 it’s the smallest, cheapest and most beginner-friendly model in the current EOS M lineup, but boasts the same sensor as the higher-end models as well as the ability to mount EF-M lenses or indeed any EF DSLR lens via an adapter. This makes it a perfect fit for anyone looking to make their first move up from a smartphone to a ‘proper’ camera.

There’s no built-in viewfinder, instead the EOS M100 relies on a 3 inch touch screen which can fold upwards through 180 degrees to face forwards for selfies. It offers PASM modes for full exposure control, but these are selected from the touch screen. The physical control layout is extremely simple, with only three positions on the mode dial for Auto, Program, and movie shooting, and a separate control dial for changing settings and menu selection. As such it’s an ideal first camera, offering simplicity with the potential for growth.

The M100 features Dual Pixel CMOS AF which allows 80% of the sensor area to double-up as phase-detect AF points, supporting smooth and confident continuous autofocus for stills and movies. It has a DIGIC 7 processor and shoots at 4fps with AF or 6.1fps with focus-locked, and films video up to 1080 / 60p with optional digital stabilisation.

With built-in Wifi, NFC for quick connection with Android smartphones, and Bluetooth, the EOS M100 is the next best thing to your phone for getting your photos onto social media, so it has all-round appeal for phone shooters looking to take the next step up. But it’s far from the only choice out there.

There’s a broad array of rivals that can compete in terms of price and features including Micro Four Thirds models like Panasonic’s GX800 / GX850, which offers 4k video and 10fps burst shooting, and the Olympus E-PL8. Meanwhile, Fujifilm’s X-A3 and the now ageing, but still popular Sony A6000 both sport 24 Megapixel APS -C sensors Like the EOS M100, which the Sony couples with a basic viewfinder and excellent continuous autofocus for sports and action. In my review, find out what the EOS M100 has to offer and whether it’s the best entry-level mirrorless camera for you!

I reviewed the EOS M100 with the EF-M 15-45mm f3.5-6.3 IS STM collapsible kit lens. The camera body is available in black, white (like our review model shown here) or grey and you can also fit one of nine coloured jackets. Here the lens is shown collapsed; in the shot below you can see that when it’s extended the barrel grows by up to 20mm. Flaps on the right side of the body provide access to mini HDMI and USB ports and a separate card compartment. The M100 battery can only be charged outside the camera using the supplied mains charger; sadly you can’t charge it in the camera using the USB port. 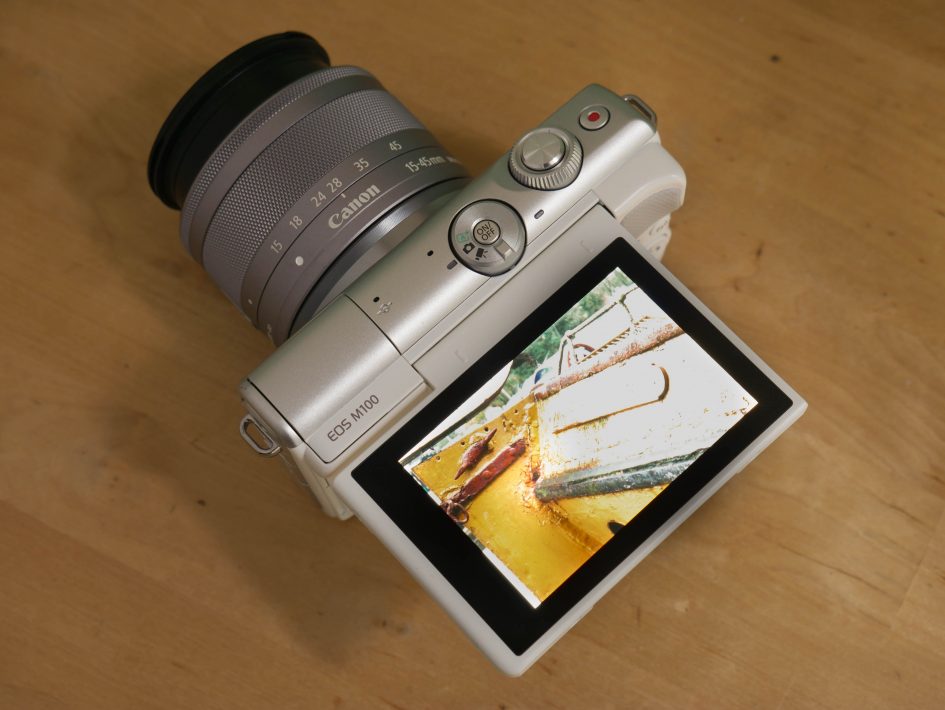 The control layout on the EOS M100 is very simple. The single control dial surrounds the shutter release and the mode dial has just three positions with the on/off button at the centre. With the mode dial in the first position the M100 uses Scene Intelligent Auto mode. Move it to the second position and you can choose any of the PASM modes as well as the scene and feature modes from the touch screen. Finally the third mode allows you to shoot movies using auto or manual exposure and to set the camera up for time-lapse movie shooting – again using the touch-screen to select from the available options.

The rear of the EOS M100 is mostly occupied by the 3 inch 1040k dot LCD touch-screen which folds up through 180 degrees for shooting from low angles, selfie shooting and vlogging. Some have criticised the screen for not folding down as on the EOS M5 and M6, but if you want to shoot from high angles you can always turn the camera upside down. As on top, the rear controls are uncomplicated, as most settings are accessed from the touch-screen, there is, however, a dedicated WiFi button, highlighting the importance of connectivity on the EOS M100.

The EF-M 15-45mm f3.5-6.3 IS STM kit lens has a 35mm equivalent range of 24-72mm. That’s generously wide and just about long enough at the other end to shoot good portraits. Above you can see the coverage at the 15mm wide angle setting. The EF-M series currently offers seven native lenses, a lot less than other mirrorless systems, but you can fit any EF or EF-S DSLR lens via an optional adapter if necessary. That said the EF-M 22mm f2 STM pancake prime is the perfect complement to the M100’s compact body and provides the opportunity to shoot in lower light levels and to enjoy even shallower depth of field effects.

Here’s the coverage at the 45mm (72mm equivalent) focal length where the maximum aperture closes to f6.3. If you want longer focal lengths in the native mount the only option is currently the EF-M 18-150mm f/3.5-6.3 IS STM. Again, the EOS M100 can also use any of the enormous EF lens catalogue via the EF to EF-M adapter, but while EF lenses will work on the EOS M100 they are are large, heavy and expensive for an APS C mirrorless body, so this is really only a sensible option if you already own a Canon DSLR and EF lenses.

The EF-M 15-45mm has a maximum aperture of f3.5 which closes to f6.3 at the 45mm end of the range. You can achieve quite shallow depth of field effects with the aperture opened as wide as it will go providing you can get reasonably close to the subject.

Fortunately the EF-M 15-45mm can focus reasonably close – 25cm. This shot was taken at the closest focus distance with the lens zoomed in slightly to 24mm and the aperture set to f4 which is as large as it will open at that focal length.

The M100’s default Picture style automatically processes jpegs for the best results, but you can manually select one of ten Picture Style options including three user defined settings with adjustable sharpness, contrast, saturation and colour tone. Above is the black and white Picture Style, other options include Standard, Landscape, Portrait, Fine Detail, Neutral, and Faithful.

In addition to the PASM modes the exposure mode screen provides a range of scene modes and creative effects filters including Self Portrait, Handheld Night Scene, HDR Backlight Control, Grainy B/W, Toy Camera Effect, Miniature Effect and, shown above, Art Bold Effect. There’s also Hybrid Auto mode which takes a short video before each still shot and compiles them all into a movie of the day’s shooting and Creative Assist mode which allows you save and reuse presets for background defocus, brightness, contrast, saturation and colour tone.

The EOS M100 can film 1080p video up to 60p with full manual control over exposure and effective continuous autofocusing thanks to the Dual Pixel CMOS sensor. There’s no mic or headphone jack, which may put off more serious videographers or vloggers. That said, though it has 4K the Lumix GX800 / GX850 also lacks a mic input as does the Olympus PEN EPL-8, Fujifilm X-A3 and the Sony A6000 – though you can add the XYST1M stereo microphone accessory to the latter’s multi-interface shoe. Though there’s no 4K video on the EOS M100, the 1080 / 50p quality is very good. Other video modes available are 1080 / 25p, 720 / 50p and 640×480 25p. NTSC 30p/60p frame rates are also available. A level display would be handy, and, as you can tell, the manual zoom on the EF-M 15-45mm kit lens isn’t the smoothest to operate.

For this panning shot I put the EOS M100 on a tripod and disabled the stabilisation. The auto exposure handles this scene pretty well. If you put the mode switch in the movie position you can set manual exposure (including ISO sensitivity) and there’s also the option to create a time-lapse movie.

There’s very slight visible noise texture in this indoor low-light clip, but the quality is otherwise good and, again, the EOS M100 handles the exposure well. For this and the other hand-held clips the physical and digital stabilisation was enabled and it does a great job.

For this final clip I rested the EOS M100 on my camera bag zoomed in a little to frame the shot and tapped the screen to adjust the focus from the beer glass in the foreground (it’s not Heineken by the way) to the bar and back. The EOS M100’s Dual Pixel AF is incredibly sure-footed and adjusts the focus back and forth without a moment’s hesitation. Canon’s sensor is one of the best around for movie autofocus.

The EOS M100 has built-in Wifi, NFC and Bluetooth. A dedicated button on the rear panel tells the camera you want to activate the Wifi and if you have an Android phone you can alternatively hold it against the camera to initiate a Wifi connection with NFC, otherwise you connect to the camera as an access point in the usual way. Wifi allows you to view and download photos to your phone and remotely control the M100 using the Canon Camera Connect app. When remote shooting you have access to exposure settings and can tap to reposition the AF area but I was a little disappointed to discover that you still can’t use the App to record a movie and pull focus using your smartphone.

The M100’s Bluetooth connection can be used for a much more direct remote shooting experience. You don’t get a live view on your phone as with wifi, it’s more of a remote shutter, though you can also use it for remote playback of photos and video on the camera – if you have the camera plugged into a TV or other large display, then you could comfortably control playback from the sofa using your phone, rather than having to crouch by the TV operating the camera on the end of an HDMI cable. It’s very basic, there’s a huge shutter button in the middle – tap it and the camera takes a photo. Two smaller buttons above the remote shutter release control the zoom and a slider above switches between stills and movie shooting. It feels very direct and responsive, the zoom is immediate and smooth and the camera responds instantly.